Dry powder formulations of Biotherapeutics eliminate the need for expensive cold chain storage and facilitate supply chain management. Lyophilisation is traditionally used for the drying process, but in recent years the semi-continuous, robust and scalable qualities of spray drying have made it the drying process of choice.

With expert formulation and process development, even the most delicate biomolecule can be spray dried with little or no loss of activity.

To understand this, it is useful to consider the spray drying process: The solution is first pumped into the drying chamber through a two-fluid nozzle, at the tip of which it is atomised into droplets by a flow of compressed air. The design of the nozzle means that the cool atomisation air protects the liquid from the high temperature of the drying gas right up until the point of atomisation. Once the solution is atomised, the droplets dry very quickly in the heated drying airstream; again, the biomolecule is protected from the heat by an evaporative-cooling effect as the droplets dry. Once in the dry form, biomolecules are generally much more robust than in solution, and the total residence time within the spray dryer is only a matter of seconds, depending upon the size of the dryer. 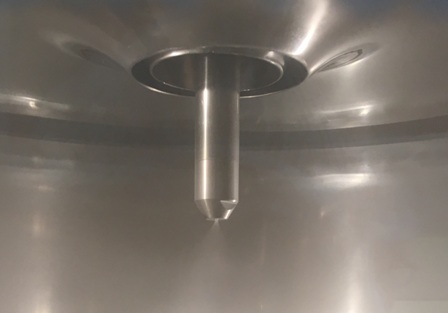 Formulation development is important to ensure the stability of biomolecules at three critical points during and after processing: on solution atomisation, during the drying process, and on storage after drying.

Surfactants, such as polysorbates or poloxamers, offer protection at the liquid-air interface during the atomisation stage, preventing protein aggregation or denaturation.

Stabilisation during the drying process is achieved by the use of excipients that can form hydrogen-bonds with the biomolecule. Sugars such as trehalose, raffinose, or dextran are commonly used, due to their high glass transition temperatures; offering enhanced storage stability of the bioformulations. Combinations of amino acids such as histidine, glycine, proline and arginine, can be tailored to offer effective stabilisation; resulting in dry powder bioformulations with excellent stability characteristics.

Polymers, for example: cyclodextrin, PVP, methyl-cellulose and eudragits may be used in bioformulations, both for enhanced stability and for other purposes (controlled release, taste masking and enteric coating).

Other commonly used excipients include:

· Divalent metal ions, such as zinc, to form dimers and reduce protein aggregation

· Amino acids, such as Leucine, and surfactants such as Phophatidylcholine, for improved powder flow and aerosolization

· Mucoadhesives such as chitosan in formulations for nasal delivery

Spray drying processing parameters can have a profound effect on the properties of dry powder bioformulations, and the process development phase is of critical importance.

Particle size and morphology have an impact on powder flow and aerosolisation properties, which are especially important in formulations for inhaled or nasal delivery. These can be controlled by optimisation of a range of process parameters: Feed solution concentration, liquid feed rate, atomisation air pressure and air flow rate, have the biggest impact on particle size. Drying air flow rate and temperature affect the rate of drying and so can be used to change the morphology of the dried particles.

Scroll to Top
Upperton use cookies to ensure that we give you the best experience on our website. If you continue to use this site we will assume that you are happy with it.AcceptPrivacy Policy