Drug administration via the nasal route can be used as an efficient method of administration for both local and systemic acting drugs. The nasal route offers a range of advantages including its relative ease of use as compared to injectable administration, patient acceptability and compliance. It also provides a suitable route for those compounds that are unstable in gastrointestinal fluids. Nasal delivery also offers a rapid delivery route into the brain for treatment of certain neurological disorders.

Despite limitations, such as: rapid clearance and poor bioavailability, low dose capability due to the limited volume that can held in the nasal cavity, microbiological spoilage and chemical solution instability the vast majority of pharmaceutically delivered nasal drug products approved for use are liquid based nasal sprays. 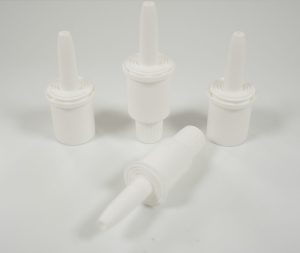 Dry powder nasal formulations therefore offer some critical product attributes that can be utilised for improved drug delivery. Powders formulation are inherently more stable than liquid formulations and generally do not undergo the same degree of microbiological spoilage. Powders formulations offer opportunities to increase the drug dosage delivered over liquid formulations and can be used to deliver modified drug formulations with improved bioavailability. For example, dry powder nasal formulations can be prepared by spray drying whereby changing the drug structure, particle engineering and / or inclusion of additives such as mucoadhesive excipients can all be used to facilitate greater nasal residence and improves drug absorption.

Despite these aforementioned advantages, the number of approved nasal powder products remains small. One of the major hurdles that delivery of nasal powders still must overcome is the availability and compatibility of a suitable nasal powder device. A dry powder drug product is a combination of both the drug powder formulation and the device; matching the right formulation with the right device performance is critical to ensure successful nasal administration. Co-development of the formulation and the device must be a key consideration right from the beginning of product development to ensure that any data generated is meaningful and scalable.

Harmonising formulation and processing strategies (e.g. particle engineering) with the device performance characteristics, will ultimately result in a reduction of the time to clinic and increase the changes of clinical success.

As discussed above, selecting the nasal powder device in the early stages of formulation development is critical due to the impact it can potentially have on the final product performance.

By aligning the development of the formulation with selection of the device, you can optimise several key factors important to nasal dry powder administration.

Some of the critical questions to consider when selecting a dry powder nasal device are:

Understanding the variables surrounding your patient profile is vital when choosing your device. For example, if the disease or age group were to affect the strength of breath used upon application of device this will negate passive devices from your choice. There are two categories of nasal device, passive and active. A passive device requires the user to blow into the device in order for the powder to be ejected into the nose; whereas an active will use either a pressure chamber or a propellant to evict the dry powder.

Each method of eviction offers individual pros and cons, for example if your target profile were children, they may not be able to coordinate the steps required to blow correctly into the device. For an elderly population, they may not have the necessary dexterity or strength to activate the pressure chamber as is required to eject the powder from the device.

Most dry powder nasal devices will state a maximum fill weight of up to 50 milligrams, some may deliver higher doses but this is very material dependant. The volume of the dry powder chamber within the device determines how much powder can be loaded into each device and therefore how much drug can be delivered per shot. During formulation development powder properties are optimised to impart suitable physiological and physical properties on the powder. Typical techniques include micronisation and spray drying.

Spray drying however, will generally require the addition of other excipients (bulking agents, buffers, bio-adhesives agents etc.) and micronized materials will typically require blending with other excipients to aid filling and prevent aggregation. Inclusion of these additives reduce the overall amount of drug that can be delivered and the processing techniques in themselves generally result in low density material which cannot be over-packed into the device filling chamber without influencing the delivery of the powder when the device is activated.

Each patient profile will require a minimum drug loading of their API for a reasonable therapeutic effect to be observed. Due to this the formulator may have to make compromises between choice of a device’s fill capacity and the powder properties of the formulation. Therefore, ensuring your chosen device can deliver the required dose is an important factor that must be accounted for during the formulation development.

Powder Seal and Packaging of Device

As with most dry powder drug formulations, maintaining stability is of the upmost importance. In reality there are several factors that need to be considered when assessing stability of a dry powder during formulation development, these being chemical and physical stability. Chemical stability can be affected by oxidation and degradation of the API that has been formulated. Physical stability of the powder itself is also important, degradation / aggregation of the particles is often driven by moisture uptake and will subsequently impact on delivery performance and emitted dose.

How a powder is sealed within a device and how the device is packaged is imperative for powder stability and product lifespan. Each device has a different system, for example in the case of the Optinose device the powder is encased within a standard capsule which is pierced upon administration, with one capsule used per administration up to thirty times before a device is replaced. The formulation for the TrivAir device, is sealed within blistered seal straw.

The Aptar Unidose is a single-use device, with the formulation being contained within a hermitic sealed chamber. Powder within the Alchemy Pharmatech device is sealed within a pressurised sack alongside a propellant.

Stability studies therefore must be performed with both the formulation and chosen device in tandem and must consider both chemical stability indicators such as assay and impurities and device performance indicators such as emitted dose, article size distribution and plume geometry.

In principle, active devices are better at disaggregating powders upon ejection. However, the TrivAir device contains an atomiser for distribution, allowing the powder to disperse when emitted. The Optinose has a mechanical process with ejection, in that the powder contained within the capsule rattles around during release, all of which is determined via the strength of blow from the patient.

Deposition Mechanism in the Nasal Cavity

Specific design features and mechanism of action of the different device type has been shown to have a significant effect on the drug product performance. The area and specific nature of particle delivery within the nasal cavity has been shown to influence drug absorption. Various studies have shown device dependant deposition of the same formulation delivered from different devices. Some will deliver the dose to anterior area of the nasal cavity while others deposited the powder deeper with these areas providing vastly different clearance and absorption characteristics. Some deliver the powder in a plume and created a larger area of deposition than others, while the design of some can result in direct contact with the nasal mucosa depending on how the patient uses them. All of these factors require assessment on a product by product basis and must be matched with the powder properties.

During the development of any product developers are always wary of future regulatory roadblocks slowing their path to commercialisation. With powder nasal delivery both the formulation and the device must be approved making the situation more complex. In recent time both the Unidose and Optinose devices have gained regulatory success with the commercial products: Baqsimi, a rescue product of glucagon, and Onzetra Xsale, for migraines. Other devices are currently in earlier stages of development such as the Alchemy Pharmatech device.

The cost of device leads back to understanding one’s patient profile, if the dosage form is destined to treat a disease common in developing countries then it is clearly beneficial to choose a more cost-effective device to lower the cost of the overall product and increase the availability of the product.

Some therapies are already expensive, such a protein-based therapies, in these cases the cost of device may be less of a concern as it’ll be a small percentage of overall costs.

With both the Unidose and Optinose dry powder nasal devices reaching commercial success, this has opened the pharmaceutical market to the potential of dry powder nasal delivery. However, formulating such dosage forms can be tricky and requires synergistic development and testing between both the powder formulation and device in order to optimise the final product performance.

Despite the challenges, the nasal dry powder delivery route is one that offers great opportunities for improved needle free drug delivery. The potential benefits of nasal powder administration such improved in vitro and in vivo stability, enhanced bioavailability opportunities ease of use and its versatility to deliver a wide range of drug substances including biologics aligned with innovative and creative device designs; mean that nasal powder drug delivery is both viable and one that deserves continued research.