Tablets are one of the most popular dosage forms used in the pharmaceutical industry due to their: ease of handling and administration for patients, stability, convenient packing options and well-established cost-effective manufacturing processes which produce consistent quality products.

However, there are also disadvantages to presenting a drug as a tablet which can include: poor bioavailability, instability within the gastrointestinal (GI) tract and the potential of causing irritant effects or harming the GI mucosa. Many of these can be mitigated against through successful formulation development. 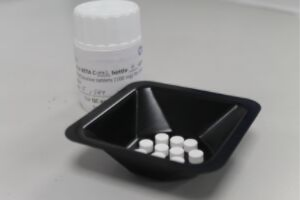 Tablets are solid dosage forms which are administered orally, they consist of one or more active pharmaceutical ingredient (API) or drug substance and a number of additional functional but non pharmacologically active materials know as excipients. These excipients are required as most API on their own do not have the necessary material characteristics to accurately form a robust tablet, and to modify the release of the drug from the tablet to ensure that the drug is delivered to the intended site of action at the desired rate. The API(s) and excipients are processed together to create a powder blend or granulation with the required attributes such as flowability to allow tablets to be compressed which will deliver an accurate and reproducible drug dose to the patient.

After administration the drug is release from the tablet as it breaks up in the GI tract and becomes available for absorption into the systemic blood system or to act locally.

Due to the nature of diseases requiring tablets to have specific delivery routes, drug release profiles and patient facilitation there are a variety of tablets types and technologies that can be applied to achieve the desired therapeutic result.

Tablets can be described in several ways including by their mode of administration or in terms of their specific drug release mechanism.

Examples of tablets categorised by mode of administration include:

Tablet dropped in glass of water where it rapidly disintegrates prior to administration by drinking the solution or suspension.

Tablet rapidly disintegrates in the mouth with the need for additional liquid or chewing.

Tablet is swallowed and releases drug in relatively short time through disintegration and dissolution in the GI tract.

Tablet is mechanically disintegrated in the mouth then dissolved in stomach / intestine.

Tablet dropped in glass of water prior to administration. CO₂ is released, facilitating disintegration and drug dissolution.

Tablet held in mouth and dissolved in saliva.

Tablet placed under tongue and dissolved in the mouth.

Tablet placed in side of cheek or between gum and lip.

Intended to release rapidly after administration.

Within the body, the API is released slowly at a predetermined or constant rate.

Within the body, the API is released over a period of time in pulses.

API release is delayed until it reaches a targeted area of the body.

Between the routes of administration and drug release profiles, various combinations can be applied to achieve the desired therapeutic aims.

Considerations When Designing a Tablet

Disintegrating tablets are the most common type of tablets prescribed. There are several processes upon swallowing which lead to a therapeutic effect, these include: tablet disintegration, drug dissolution and drug absorption; all of which can have an effect on the bioavailability of the drug. These processes can be controlled via formulation factors and production conditions.

Chewable tablets obtain rapid drug effect through mechanical disintegration of the tablet in the mouth. They also help facilitate administration for certain patient profiles such as the elderly or children. An example is antacids.

Effervescent tablets are used for facilitating drug administration and rapid drug action. The release of CO₂ within the stomach, induces the body to empty the stomach quicker; allowing the API to be absorbed within the intestines with short residence time. This decreased residence time can avoid gastric irritation. Examples of drugs which use this technique are analgesics and vitamins.

Compressed lozenges are dissolved slowly in the mouth for both systemic and local drug delivery.
Sublingual and buccal tablets are both used for rapid systemic uptake. This has an advantage over other tablets in that it can avoid first-pass liver metabolism which can affect the bioavailability.

Immediate release tablets release the drug as soon as the tablets disintegrates making it immediately available for absorption and generally resulting in a rapid onset of action which may be required for a fast therapeutic effect such as pain relief but can also result in loss of drug potency due to instability in the stomach contents and/or irritation of the GI tract.

Extended or sustained release tablets are designed to release the drug at a desired rate so that the drug is available for absorption over a longer time frame depending on the therapeutic requirement. This can be used to minimise side effects that may be experienced if all the drug is available at once, to reduce the number of doses required throughout the day or to maintain therapeutic effect for longer.

A delayed or targeted release profile is designed to release the drug at a defined area of the GI tract. This can be achieved using a range of approaches which will inhibit the immediate disintegration of the tablet and therefore drug release until it has reached the desired therapeutic site. For example, this approach may be used to deliver a drug to the small intestine or colon where is it has a preferred absorption window, displays reduced side effects or is not subject to instability due to the different pH environment from the stomach.

It is clear that while the design and formulation of a tablet is a complex and multifunctional process that must consider many factors to ensure that the drug can be delivered to achieved its optimal therapeutic effect, it also offers a wide range of technical options for the formulation scientist.