Upperton will be celebrating its 20th anniversary on the 31st August 2019. Over this time Upperton has developed from a small consultancy business to become one of the world’s leading exponents of pharmaceutical spray drying services.

To mark this occasion, we are publishing a special two-part newsletter. In this first part Upperton’s founder and CEO Dr Richard Johnson talks about the company’s origins, what has driven the business’ success over the years and how the industry has changed. 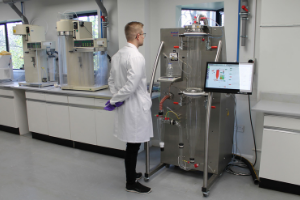 In the subsequent edition we will talk further with Dr Johnson to gather his thoughts on what the future years might hold for the company.

What does the 20-year anniversary mean to you?

I have enjoyed the last 20 years immensely, running a business and planning its direction and growth is extremely rewarding. Indeed, the pharmaceutical and biotechnology industries play a pivotal role in our future health and wellbeing and as a result we have being able to work on some amazing products. Even more exciting is seeing them continue to proceed onto the market, which of course is very satisfying.

We’ve been operating successfully in the sector for 20 years and in more recent years we have been fortunate to grow hugely as a business, expanding from a couple of people in a shared office, to our own stand-alone 15,000 square foot facility with more than 25 staff. Watching this growth and evolution from a small research company to a fully-fledged CDMO staffed by some tremendously skilled people is something I’m incredibly proud of.

What have been the highlights for you?

There have been many highlights and important landmarks achieved along the way. Undoubtedly 2018 was our most successful year ever. In the space of eight months last year we doubled in size, moved into our own building and successfully passed an MHRA inspection to enable us to produce GMP batches for clinical trials. That was some going by anyone’s standards!

What has driven Upperton’s success?

There are a number of things, but I think the most important are the people that work for us are our most important asset and our driver for growth. Our ability to recruit, and even more importantly, retain good scientists has enabled us to build up trust with our customers. In return, our levels of repeat business and referrals are very high such that these customers represent our main source of revenue.

Of course, our knowledge around our core technology, spray drying is in my opinion, unrivalled and it is this experience, coupled with the versatility of spray drying, that has underpinned our growth.

There’s also an appetite for change throughout the business. We’re constantly adapting and adopting new technology, and evolving in-line with customer demands and the advances in technology.

How has the CDMO sector changed over the last 20 years and how has it affected Upperton?

In more recent years, spray drying has become an established formulation technology. In 1999 the technology was still establishing itself in the sector. Now it it is widely recognised as a key processing technology with a broad range of applications from relatively simple production of dry powders to enhancing bioavailability of poorly soluble drugs and particle engineering.

Back in 1999, when we first began to offer contract services, spray drying was very much a niche process in the pharmaceutical industry. These studies quite often came from larger pharma companies wanting to know whether spray drying could produce a dry powder without damaging the product and the customer would take care of all of the analytical aspects, we simply dried these formulations and shipped them for analysis.

Fast forward to 2019 and the size of client companies and the services they seek have changed considerably, particularly in the last five years or so. Today many of Upperton’s clients are small, virtual companies that quite often don’t own laboratories and employ few scientific staff. As a result, they need to outsource their full formulation development process from early feasibility to clinic. As a result the size and breadth of the projects we undertake have gradually increased in terms of the range of services needed as well as the complexity.

There are many changes that have occurred in the CDMO sector, probably the main one being the increase in both the size and number of CDMO’s that operate in the industry, which of course has grown dramatically.

The growth and consolidation the CDMO sector has in part been driven by their big Pharma clients that prefer alliances with service providers that can take them from feasibility to commercial manufacture under a single supplier agreement. In very simple terms big pharma generally began to seek their service needs from larger contract service providers, whilst Upperton’s clients became increasingly smaller!

When I look more closely at the spray drying service providers in the CDMO sector it is clear that the industry has seen significant consolidation. In particular we witnessed all of the major service providers being forced to acquire spray drying capabilities, usually by acquisition, as the demand for the technology began to increase significantly, especially over the last 3 years or so.

Now, in order to survive in the current climate, smaller CDMOs have had to become more specialised to differentiate themselves from their larger competitors such that they are seen as the “right fit” for small and virtual start-ups and offer a nimbler, highly-specialised yet flexible service.

How has your core spray drying technology and its applications changed since Upperton first began to market this service?

The number of potential applications for spray drying has increased dramatically over the last twenty years, along with its general acceptance as a formulation technology by the pharmaceutical industry.

The broad utility and cost effectiveness of spray drying has enabled the technology evolve from what was traditionally seen as a simple drying process into a specialist formulation technology. Applications now include enhancement of bioavailability, encapsulation, particle engineering and the stabilisation of biologics alongside its traditional bulk drying capabilities. Indeed, the use of spray drying to enhance bioavailability has been a key driver for growth such that it is probably the largest application for our technology in our industry.

Spray dryings equipment has also increased in complexity with the development of dryers adapted to spray dry organic solvents, dryers capable of handling very small quantities of highly valuable products and more recently dryers that can operate under aseptic conditions.

Traditionally, Upperton has worked primarily with small molecules but in the last 5 to 6 years there has been significant growth in the use of spray drying to produce dry powder formulations containing biologics. Whilst many clients were initially reticent to subject their heat-sensitive biologics to the perceived rigours of spray drying, more and more are now seeing the advantages of spray drying as a bulk process for producing dry powders without the potential to damage even the most sensitive of products.

There has also been a resurgence of interest in using spray drying to create dry powder dosage forms for delivery by inhalation. This type of application was something of a “hot area” back when we first started but until recently interest had waned following the problems caused by the failure of a number of late-stage inhaled insulin formulations in the clinic.

Scroll to Top
Upperton use cookies to ensure that we give you the best experience on our website. If you continue to use this site we will assume that you are happy with it.AcceptPrivacy Policy